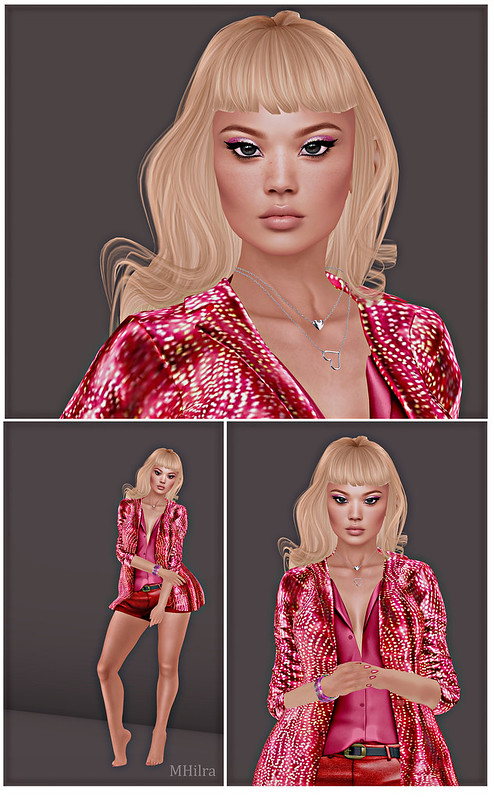 Now, I am sure you will all think this is long and annoying but, no worries little chickadees!
I have a VLOG too!
—>  CLICK HERE FOR OUTFIT AND APPLIER INFO! <—
Trust me… this video is very important… very serious! Totally DRAMATIC!
You don’t want to miss it… hehehe…
♥
Please note that I have since modified the following post, as I originally thought something else was said on the show but, after I did my research, I found that I was mistaken, and heard incorrectly, and so I decided to rewrite the mishap. Enjoy the post!
♥
Also… before anyone gets into a tizzy… this is just an opinion. I am not taking sides, well other than the side of inspiration (not to be confused with flat-out copybotting.)
♥
Have any of you ever watched a show called Project Runway?
♥
If so… The hosts are constantly asking the participants to recreate or use as an inspiration another designer, or random things in life as inspiration.
♥
When the host asks them to use another designer, or brand as an inspiration, do you accuse them of encouraging the participants to “copy”, or do you accept it for what it is? An inspiration.
♥
Now, I happen to know FOR A FACT, that designers will stalk brand names to see what their new releases are, so they can see if they can make it better, more affordable, or just to “copy” their idea…
♥
Now, I am sure some of you shop in RL for clothing, and no doubt those places that you shop have done this exact same thing.
Now, I understand in Second Life, copybotting (where someone uses software to create the EXACT same thing), is a real issue, however, over the past couple years, I have watched many of you attack each other because so and so “copied” another creator “idea”, or made the exact same dress but, with slight changes here and there…
So, I suppose my question is, copybotters excluded, what is the difference between what Alyssa did, and those creators are going to do because of what they were asked to do, and creators getting ideas/inspiration from other creators in Second Life?
♥
And W T F is all this hubbub about creators in Second Life, taking inspiration, or flat out making something from RL and bringing it into Second Life?
♥
All of us are guilty of saying, “Gee, I wish someone would make BLANK in Second Life”… so why complain about it when someone DOES? Not using their brand names or logos… but, using a photo for representation and then, making it in SL.
♥
And again, I am NOT including actual botters.
♥
I am talking about legit creators, bending to the masses, and creating inspired by RL items. Or, recreating items that others make but, with differences… Be it, texturing, colors, additions parts…
♥
In my opinion… If you are a creator, you are in constant competition with others! You see someone making something so very similar to something you have made, and you cannot even tell the difference, then change it! Release it. Stay on the ball!
♥
It feels like I have to constantly say this… but, again, I am NOT including the botters. Just the actual creators.
♥
Anyway… I would love you to share your thoughts. Only mature conversations. I will not have anyone come to my blog to bully each other.
Enjoy!
♥○♥
ps… I am not (officially) stalking Voshie Paine… (atm). She doesn’t work for whore couture…. (as far as I know…) and I would never do that (and get caught)… Only really “special” people do things like that (my momma says I am special all the time)… She is completely safe!! (as long as she doesn’t drink that expired milk in her fridge)… BTW! remind me to buy her some fresh milk! (oops… now people will think I am really stalking her……..)
hehe.. love ya, Voshie!