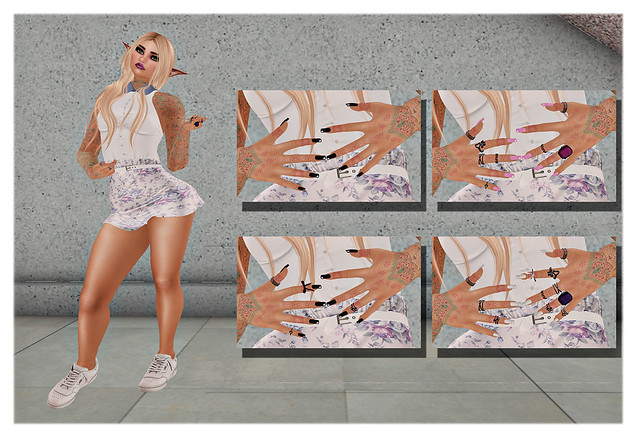 It is time for another awesome round of, eBento.. and trust me when I say, this round is going to be amazeballs!
Yes, that is a word…. haha.. well it is for day anyway.

In my teaser photo I have decided to share Carol g, Arte, Poema, 7 Deadly Skin, Exile and Drastic! Also two poses from, Gingerfish!

The inserts show several different options for the Drastic Bento Ring set..
It comes with nails, and you can wear the rings without the nails but, I figured I would just keep mine ON.. hehe.. but, I think you can see, these are just a few of the choices that you can make.
You are able to color the jewel, and the bows but, I didn’t see if it were possible to color the rings themselves (metals).

I will also be showing of other items from this round, through out this month, so make sure you stay tuned!

Here is a video I did for introduction, as well as a short montage but, no worries, everything that is at this round is included in a short clip.

I would have done a longer video but, as I mention, I am still not 100% and with the weather wreaking havoc all over the world, it has gotten harder to fight the flu.

I hope that you all get a chance to make it to this round of, eBento..

Also, as mentioned in my video, I hope and pray that everyone is safe and sound, all over the world.. and that you let your friends and family know that you are OK.