The above image is one that is on the website.. I chose to use this one, instead of the more classic Arcade Gacha insignia because, this one looks so much more, personable.

I went, I played, I got some cool stuff, and over the next few posts, I will share with you some of the awesome stuff…

Today, I am sharing a mix of gifts, and personal wins….

Gifts? Why yes! It is the Arcade’s 5th birthday and some of the awesome creators have offered a gift!

They are located in the center of the event.. so make sure that you do not miss out on those. 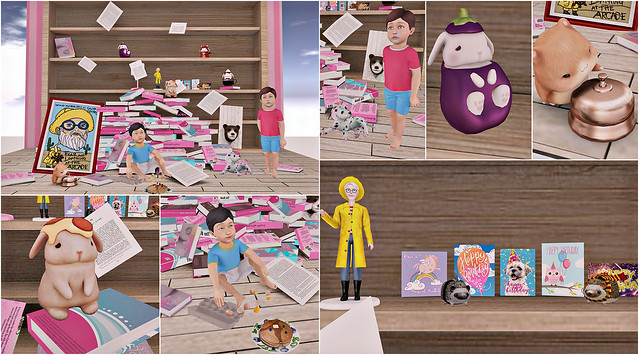 The event runs all September, so if you do not get in straight away.. do not worry!!

There are a few TP areas however, I managed to get in almost right away to the main port area.

You can now shop on

and “The Arcade 3” regions!

If any of you happens to get an extra Genesis Head, and you want to get rid of it.. I would totally blog it and you!!

I played it….. several times, and believe me.. you do not want to know exactly how many times… hehe… yeah.. it got bad..

I will also be boxing up some of my duplicates, or ones from stores I didn’t want… like, colors or something… and I will give them away, like I always have..

In order to be considered for that, all you have to do is either comment/fav here.. OR, on my flickr.. Comment/Fav on flickr with your name legacy name.. not your display name.

If you are new and do not understand what I mean, I mean the name that you signed up with.. not whatever name you changed it too..

I have one of those.. here, I will show you!

Morgie is my display name.. and Morgana.Hilra is my legacy.

Ok, so.. in the description coming up, make sure you read the FULL line.. it will tell you if the item is a gift or a prize..

I am going to do this post a tad differently.. I will link the STORE instead of the event since the event is linked above.

And I do not know about you but, when a creator gives out a gift at an event, I tend to visit their stores, and have a look around.

I have found many stores I love that way.

Not that I do not like the ones that didn’t offer.. I would not have played their gachas.. but, since there is a mix here, I decided just to add all the store urls.

HAPPY CAKE DAY TO THE ARCADE

2 thoughts on “It’s THAT time of year again!! The Arcade!”