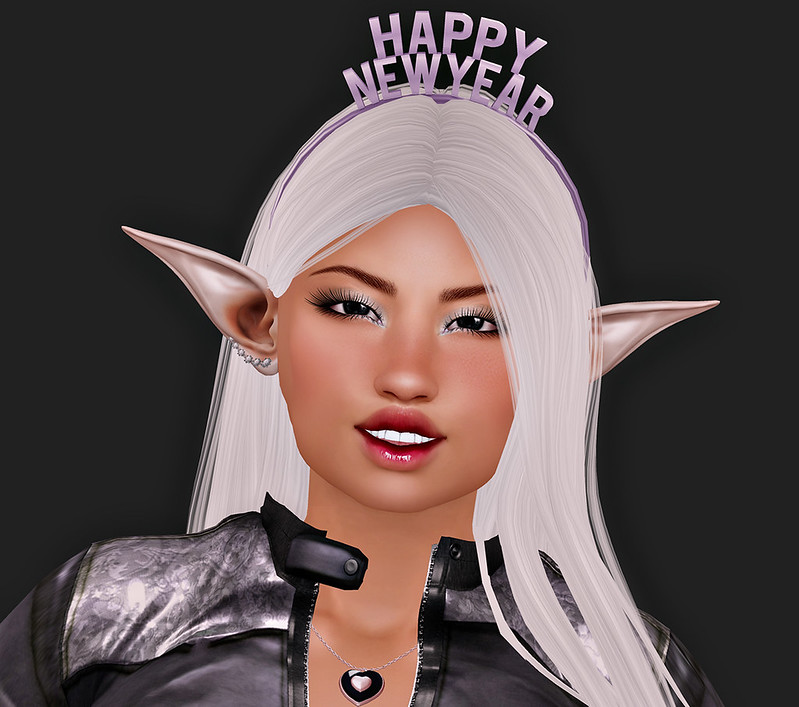 You would be surprised to know that, after I once again, subconsciously decided to break myself once more for fun, I went out.. on the grid/town so to speak, and started my year off, being open, friendly, and engaging with some of the other residents of, Second Life.

If you know me, you know that I spend most of my time, hiding out in my skybox/studio at Tiseral and my home.. Taking photos, and video and all the wonderful things I come up with in that room… but, I thought, why not break my own cycle, and try and meet some interesting people!?

So, I met some very interesting people!

First up was,  Nethy Nirvana.

I approached her because, we were trying out the same AO over at Uber from, Body Language… she had on the most adorable tail! I really wanted to know where it was from, and normally, I would just use the inspect function available in Firestorm but, no… this year is all about being more social and talking to people!!

And it was an amazing experience because, we ended up chatting for a long time.. and it turned out we had a friend, Kismet Rhapsody in common..

Now, I had not seen her in a very long time, and it turned out there was a reason for this… she left SL… that sucks but, in the end, I ended up with a new friend, for the New Year… my first of many this year, I do hope… 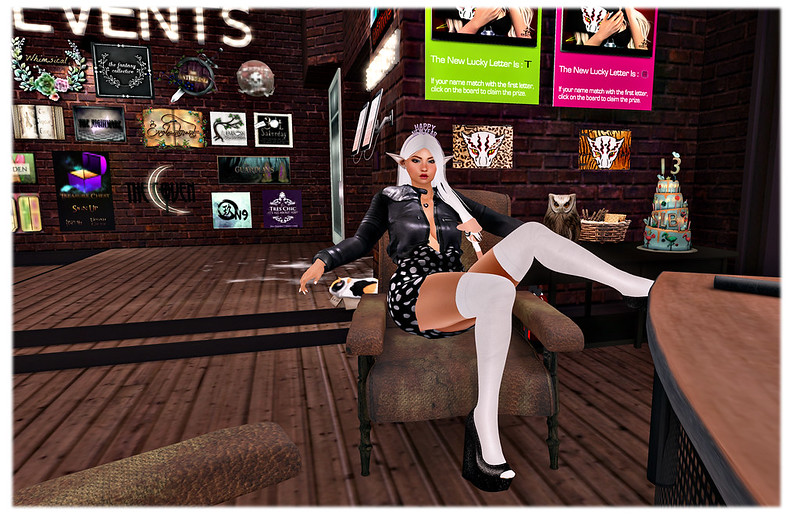 Don’t mind me up there, I was just stopping by, Ersch to take a break and look around…

The next friend I made was this Amazonian woman named, Alexstrassa Resident whom, I met at Akeyo .

I had to admire her avatar because, normally, when I see an avatar similar to hers, the person has over done themselves…… meaning, extremely large breasts, or their hip are INSANELY while.. or just something, that makes no sense to me.. And don’t try to be “politically correct” in SL, those shapes are down right scary… to each their own. They like it and that is what is important but, as with anyone, the way we chose to be in SL is going to bring a lot of stares, odd looks, strange comments, and questions…

Anyway, I had to admire that, with all the insane avies out there, her’s was better put together.

And, here I thought that maybe she would be insulted by the fact that I just pointed out the look of her avatar, and compared it with those… Uh.. highly imaginative looking avatars out there on the grid.. but, nope!

She seemed very happy and impressed that I DID tell her all this.. we ended up chatting for quite sometime, and then she added me… So, that was awesome!

And then, later in the day, I met Mr. Seven Sparrowtree …

I saw him at, Gabreille contentplating life, when I was freebie hopping with my friend, Max/Matt..

We were kidding around that Mr.  was likely a scot, given that he was dressed how he was, so I ASKED HM! 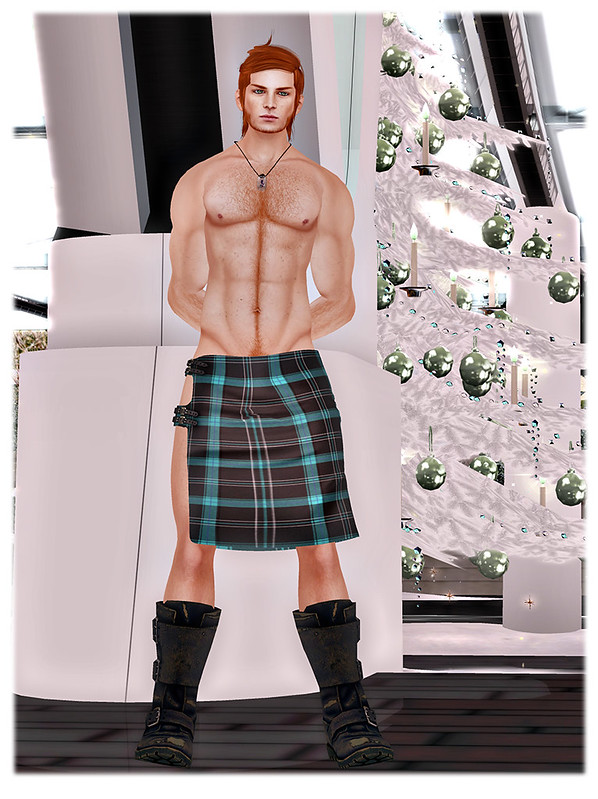 Turns out that in his own words, “He is just a ginger in a kilt”… but, an awesome one!
He reminded me of my friend, Alex whom I completely adore but, isn’t in SL much.. sucks. grrr.

From there, we ended up talking for a couple hours about fashion, and Second Life, and freebies, and our opinions on the whole, Facade that is Second Life… hell, we talked about a whole number of things, and in the end, I offered friendship to him, after finding out, we were connected in a very odd way, lol…

First, he remembered me when I use to work for Seraphim!!!

Also…… sigh, apparently he met me once on his female avie, and I was less than nice about his shape…… which, unfortunately, sounds like something I would… case in point, read above… lol.

So, in one full day, I made 3 new friends, by being outgoing, and chatty…. this is how I would love for my new year to be…

Less time as a shut in, and more time.. out in the “world”, meeting new people, getting to know others, and just having some fun for a change lol..

Not saying that blogging isn’t fun… it can be.. but, sometimes, it is draining… so, this way.. I can blog still but, opening myself up to meeting new people and having new experiences, will make me a better blogger… and hey, you never know.. I may learn something!!

So, anyway… I will share my look down below however, of course I am unable to share theirs but, this was just an introduction to some pretty cool people..

First, I want to say…. if you have had a past history with any of these people… unless they committed MURDER, I do not want to know.. I judge people on how they treat ME… not how they may have treated you in the past, or your past grievances.

People change.. or, maybe each person has a different experience with each other. I can tell you right now, there are many people on my Second Life friends list, that have not gotten along with others but, get along with me just find!

And second… thank you to Nethy, Alexstrassa, Seven and of course, Matt for helping me make a great first step in my new year!

OH! before I forget!!

I wanted to share what the newest skin addition Sabine from, Pink Fuel looks like on my Limited time free shape, Yoshima!!

remember, you do not have a lot of time before she goes up to normal price but, here is a nice look, at both styles on this shape!!! 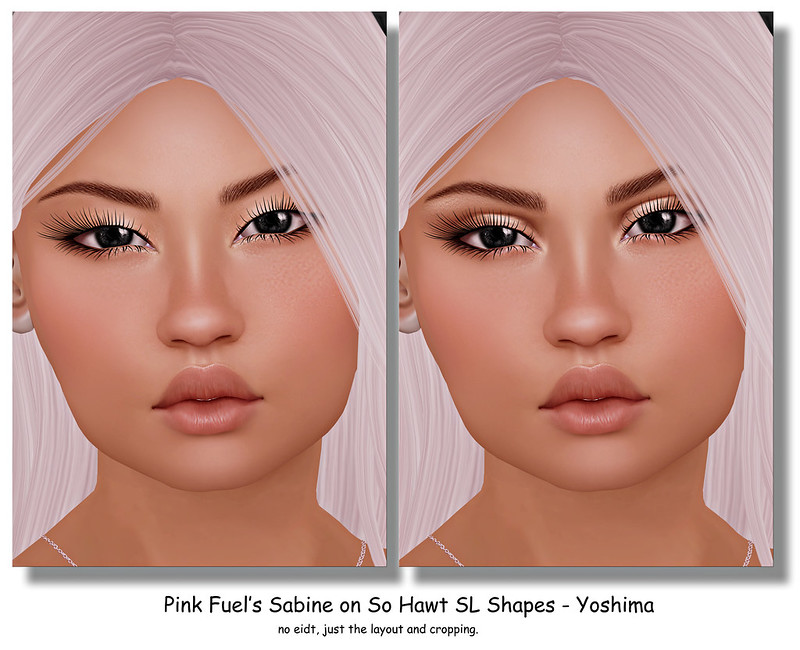 Alrighty! So, on to the look.. I hope you have enjoyed this post.. and I am actually going to start a new Catagory … 2017, personal experiences.

Not sure what the pose was but, I was at ERSCH.