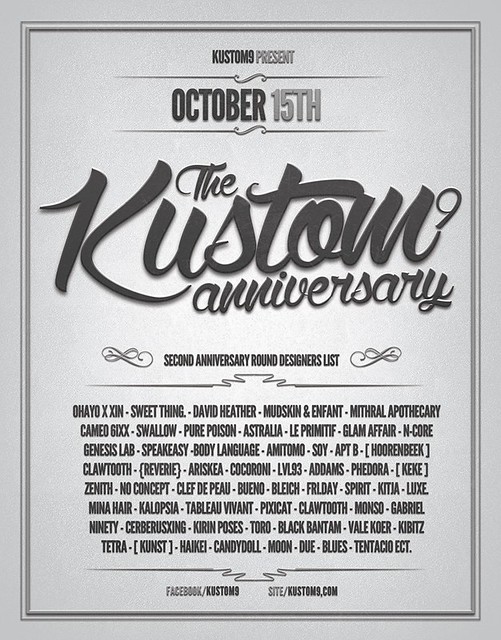 I really do love it when events have anniversaries and the stores that are participating … participate!
By offering a freebie, dollarbies or a special priced item…
Not only as a shopper but, as someone that sees the shopping events as a community..
When the designer participates in the anniversaries, to me, it shows that they respect the event, and they are proud to be members of it!
Like at Kustom9​ .. I see all these amazing stores that have items out for 9L… some of the stores don’t.. I am not sure why not, as I am not the designer, so I do not know why they chose not too but, for those that have…
Kudos to you! You all get so much more respect from me!
This is not only great for respect of the event, or for traffic but, say for someone that has never been to the event before.. maybe they do not know the designer.. this give that consumer something to try of that designer…and, 9/10 they like it, and shop more often.. tada.. new customer!
I think, those of the designers out there that are a part of this event, should take what I have said into consideration….
This is not a dis, and should not be taken as such but, it is something to keep in mind… food for thought, as they say..

If you would like to see a great gallery of this round of Kustom9, before I blog all that I can, lol…
Have a look at, this post by Cinder over at, Seraphim!